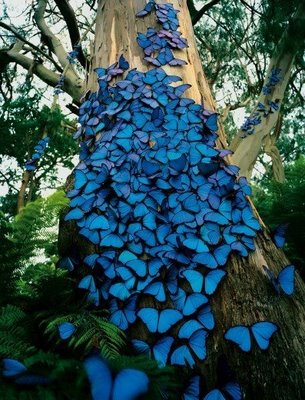 Some people view most insect types as Big Creepy-Crawlies that are scary at best, or dangerous and scary at worst.

Butterflies, however, have always gained positive interest from humanity, given their beautiful colors, their graceful flying, and the fact they look like they would rather drink nectar from flowers than star in the next B horror film. They became symbols of the wind, reincarnation, transformation, the soul, and magic throughout the ages. As a result, butterflies have appeared numerous times in many media.

That said, don't let your guard down around their petite and attractive forms. Butterflies in fiction have an occasional history of being paired with some darker trait like poison; which has made them popular with various Vamps and Honey Traps as well as any villain that chooses the butterfly motif to represent subtle allure and deceptive deadliness.

Contrast Macabre Moth Motif (although if someone is invoking this trope to hide how deadly the butterfly is, the difference between the two is only skin deep) and Moth Menace, in which butterflies (as well as moths) act as active threats.