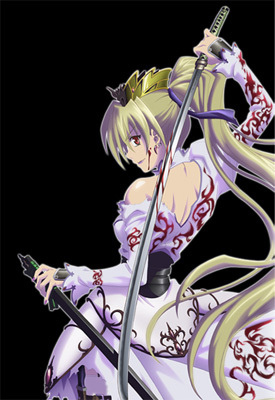 Try to put this damsel in distress...we dare you.
"What, you think a feudal warlord's daughter just sits around arranging flowers all day?"
— Usagi Yojimbo RPG
Advertisement:

With all the luxury afforded to a princess and all the knights dedicated to her protection, who would have thought the most dangerous person in the castle is the princess herself? She doesn't just knit or gossip, this princess has developed remarkable powers and abilities to fight. Most are shocked when they first meet her to find she is ever the beautiful rose, but with some razor-sharp thorns.

So while she may look like a dainty Princess Classic (and she may even be perfectly sweet and nice when not in combat), Authority Equals Asskicking is in effect instead. Most of the time she fights better than those who serve her. Depending on how she fights, Muscles Are Meaningless may be in effect.

While this and the Rebellious Princess sometimes go hand in hand, they do not automatically equal each other. In fact, a pretty princess powerhouse will often fight because she's loyal to her nation and would fight to defend it at any cost. Or she might fight just because you piss her off.

If she's kid-friendly, she'll often be a Girly Bruiser. She might be a Lady of War with an elegant weapon or just a Cute Bruiser who will get her hands dirty, or she might even switch back and forth. Tomboy Princess, on the other hand, is more complicated; tomboys stereotypically either don't care about the "pretty" part or are disdainful of it, which would disqualify them for this trope depending on the specifics of the character herself.

Thanks to the Ermine Cape Effect, she will almost always be Kicking Ass in All Her Finery, and may even have a Battle Ballgown or two.

A heroic Pretty Princess Powerhouse can eventually become The High Queen, and might already be the daughter of one. An evil version (with an equally evil father) will probably be Daddy's Little Villain, and will only get worse if she manages to inherit the throne; these types often overlap with Dark Action Girl and are an example of Beauty Is Bad. Either type who is an actual monarch with the title "Princess" (rather than heiress to the throne) is also an example of Princesses Rule.

A Sub-Trope of Royals Who Actually Do Something (and the thing here is kicking butt).

A Sister Trope to Beware the Nice Ones, Killer Rabbit.

In particular, compare Warrior Prince which still covers princesses. That trope includes princesses whose royal duty is combat or who have chosen to be professional warriors. In relation to that trope, you can think of this one as non-professional princess warriors. The "pretty" part is not optional here. Please keep this in mind so the trope does not decay like its predecessor did.