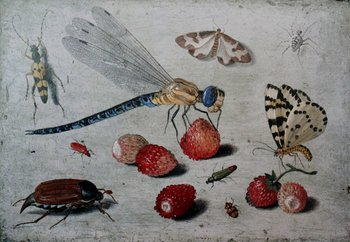 A Dragon-fly, Two Moths, a Spider and Some Beetles, With Wild Strawberries by Jan Van Kessel
"Their angular limbs, their jerky movements, their dry, metallic noises, all suggest either machines that have come to life or life degenerating into mechanism."
— C. S. Lewis, Surprised by Joy
Advertisement:

The index for all six-legged, two-antennaed, two compound-eyed note Insects actually have five eyes, but only two of them have compound lenses. The insects best known for this feature are the flies, the insects in the order Diptera, defined by their single pair of clear wings. things that make up the largest class in the arthropod phylum note The phylum Arthropoda is already the largest phylum in the animal kingdom. So, this index is on the largest class of animals in the largest phylum in the Kingdom Animalia. and the largest taxonomic group in all the animal kingdom note The largest order in the insect class is the Coleoptera, or beetles.

A very common colloquial term for insects in general is "bugs," whereas actual bugs are insects in the order Hemiptera.

See Arachnid Tropes for tropes pertaining to another class in the arthropod phylum.