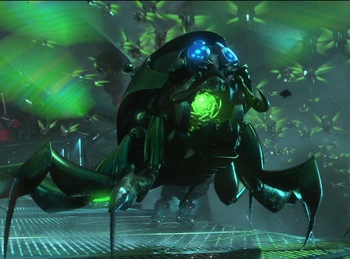 This Cy-Bug is more machine than bug.
Advertisement:

Sometimes in fiction there's an overlap of bugs and machines being mixed into one new type of being: Robo-Bugs. These robo-bugs have what you call the best of both worlds: multiple limbs and visors/eyes, sometimes they have wings and other body parts that only bugs have. These critters usually will appear being employed as Mecha Mooks by the villains or have antagonistic roles, though that does not mean that necessarily all examples will be evil-aligned or antagonistic.

Generally speaking, the main reason for the trope's usage might be rooted in that both bugs and robots are both usually seen as uncanny by many people and that the bugs' different anatomy to vertebrates might make them look off compared to all other living beings. Sometimes an inversion might be found with bugs which have robot-like characteristics or become cyborgs, though these tend to overlap with other tropes.

Further, arthropods' exoskeletons and segmented limbs and bodies translate better to a robotic design than vertebrates' flexible skin and smoother outlines tend to. Even a robot that is not explicitly designed to resemble an arthropod can still bring one to mind through its plated outer armor, many-jointed limbs, and featureless eyes. At the very least, it's going to resemble some kind of insect more than it's likely to resemble a lizard, bird or mammal.

Another reason for this trope's usage is that one of the main issues with building robots is stability: two-legged robots tend to tip over very easily, and while wheels and tracks are more stable they also don't do too well on uneven terrain. Multiple legs solve both issues at once, and most real-life robots tend to have four or six walking limbs.