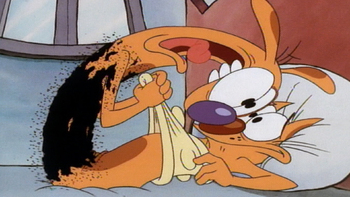 Having fleas is no fun, especially if you're a furry animal. Fleas suck up your blood for nutrition, and make you itch like crazy. Essentially, a Flea Episode is centered on a character, usually a Funny Animal, having fleas, and doing anything he can to get rid of them and/or relieve himself of his itch, which includes powders, collars, and baths. In a few instances, the character will actually befriend their fleas, and try to protect them from other characters who want to get rid of them, regardless of how itchy they make them. Expect these kind of episodes to have Flea pun-based titles. This trope has nothing to do with the bassist from the Red Hot Chili Peppers.