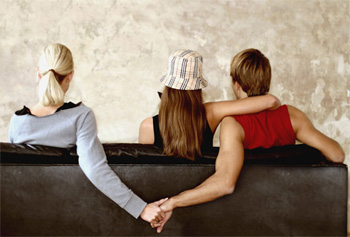 Adultery. Two-timing. Seeing someone on the side. Having an affair. Cheating. Whatever it's called, the act of having a romantic or sexual affair with someone other than one's established spouse or lover has ever been a source of drama in fiction and in real life. It has brought lovers together, but it has also torn lovers, marriages and even families apart, and it is one of the most common reasons for someone to end up killed. These tropes explore infidelity, the forms it takes, and the effects that it has upon people. See also Netorare.