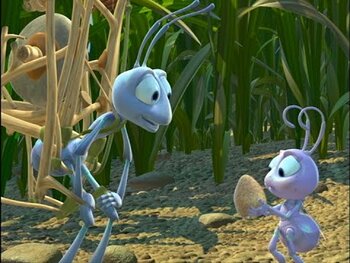 Ants, at least when they are anthropomorphic, tend to be depicted as some of the friendlier bugs. This is likely because the way ant colonies are organized in real life evokes many parallels to human society, with division of labor between workers, different castes that each possess their own duties, and nests designed in a way that could be compared to human cities. Ants will even form symbiotic relationships with other bugs like aphids that resemble the way humans care for livestock. Their devotion to communal life may also be seen as a noble trait that leads to ants being portrayed as sympathetic Working Class Heroes.

Other traits that may make ants relatable to humans include their intelligence — ants are capable of using scent trails, landmarks, and the position of the sun to find their way back to the nest from long distances even by human standards — and their strength, a trait often associated with heroic characters. Since they usually lack wings they aren't considered as much of a nuisance either.

This can also include fictional species based on ants and characters with ants as an Animal Motif.

Subtrope of Animal Stereotypes. Compare Virtuous Bees, another social arthropod that is often depicted as friendly for many of the same reasons. Termites and wasps are often seen as the Unpleasant Animal Counterpart to ants if the work features both. Contrast Ant Assault for a less positive depiction of ants (and one that is far more likely when they are depicted as non-anthropomorphic).