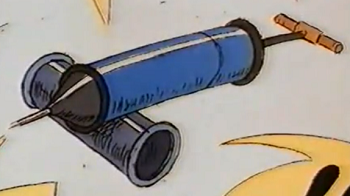 "Stand back!" ordered Mr. Wonka, and suddenly, from some secret place inside his coat-tails, he whisked out a spray-gun. It was one of those old-fashioned things people used to use for spraying fly-spray around the room before aerosols came along...
—Charlie and the Great Glass Elevator
Advertisement:

Flit guns were in common use from about the late 1920s until the mid-1950s, which coincides almost exactly with The Golden Age of Animation. While Golden Age cartoons with flit guns are just reflecting contemporary technology, it's their use of such devices which established flit guns as the Universal Cartoon Symbol for Bug Sprayer and they've remained so long after the technology became obsolete in the real world, replaced by the aerosol spray can.

Rabbit uses an old-fashioned "flit gun" sprayer on the bugs in his garden.

Rabbit uses an old-fashioned "flit gun" sprayer on the bugs in his garden.