Series / Where in Time is Carmen Sandiego? 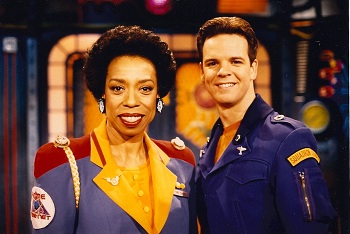 Hang on tight! We've got a very big mission but very little time!
"We're on the case and we're chasing her through history!"
Advertisement:

The second game show in the Carmen Sandiego franchise, and the successor to Where in the World is Carmen Sandiego? on PBS, Where in Time Is Carmen Sandiego? challenged kids with history instead of geography. The action took place aboard The Chronoskimmer, a massive floating Time Machine powered by knowledge and dancing crew members. The gumshoes were renamed "Time Pilots", host Kevin Shinick was their "Squadron Leader", and "The Chief" Lynne Thigpen from World had a much less prominent role. And for the first (and, to date, only) time, a live actress played the lady in red herself.

The format was virtually identical to that of World. Three contestants answered trivia questions to earn "Power Points" (instead of "ACME Crime Bucks") and track one of Carmen's crooks through time. Eventually, the contestant with the lowest score was sent home with a Consolation Prize package, and the remaining contestants played a mini-game that had them place historic events in reverse chronological order. The winner moved on to the Bonus Round, "The Trail of Time", to try to capture Carmen and win the grand prize.

We're on the case and we're troping her through history!