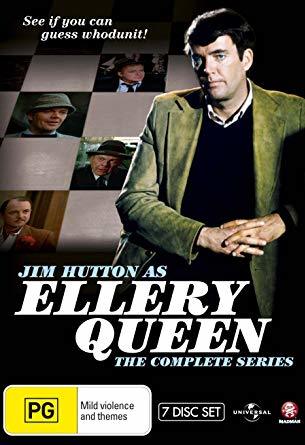 Ellery Queen was an American television detective mystery series that ran for one season (1975–76) on NBC. It starred Jim Hutton as Ellery Queen and David Wayne as his father, Inspector Richard Queen. Other characters include Sgt. Thomas Velie (Tom Reese), Inspector Queen's right-hand man; Simon Brimmer (John Hillerman), a radio sleuth who tries to solve the crimes before Ellery does (and always fails); and Frank Flannigan (Ken Swofford), a newspaper columnist who greatly annoys Inspector Queen by inserting himself into murder investigations looking for the latest developments.

Set in post-World War II New York, the show closely followed the format of the early Ellery Queen mystery novels, where just prior to the presentation of the solution to the mystery, a "Challenge to the Reader" was issued, in which the suspects and clues were reviewed and the reader challenged to guess the solution to the crime. In the show, this tradition was preserved by having Ellery Queen break the fourth wall and speak directly to the viewer prior to the commercial break that led into the final act. The final act always employed the time-honored detective cliché of calling together all the suspects, with Ellery Queen presenting the solution to the group, frequently upstaging and skewering the solution proposed by whichever rival sleuth was also in the episode.

Tropes used in Ellery Queen include: