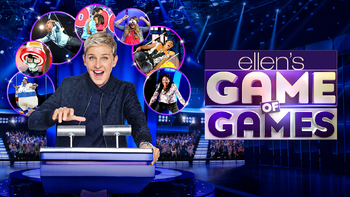 An NBC Game Show hosted and created by actress and daytime television personality Ellen DeGeneres; it is basically a Minigame Game, where pairs of contestants must participate in physical stunts or games adapted from those done on The Ellen DeGeneres Show as an Audience Game.

The four winners advance to the final round, "Know or Go", an elimination game (and perhaps Ellen's most famous audience game) where the contestants take turn answering questions posed by Ellen. If they don't answer correctly or take too long, they get eliminated. Oh, and they're also dropped through a trapdoor under them. The last contestant standing gets a chance to play a Bonus Round for $100,000.

It premiered as a preview in December 2017, and premiered in its normal timeslot in January 2018. It ran for four seasons; the final episode aired in May 2021, and its cancellation was announced in January 2022.