The Show of the Books 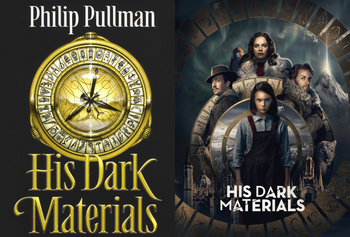 Left: The 1995 book trilogy, Right: The 2019 TV adaptation
A book series is adapted into a TV series. Not just a TV Movie, but a regular weekly series about the characters. Unless the book series is already a Long Runner, this is probably going to overtake the source material quite quickly, expand its story, and become its own Alternate Continuity. In fact, it may not even use the books as anything other than a source of characters.
Advertisement:

Compare The Film of the Book. Contrast Anime First.