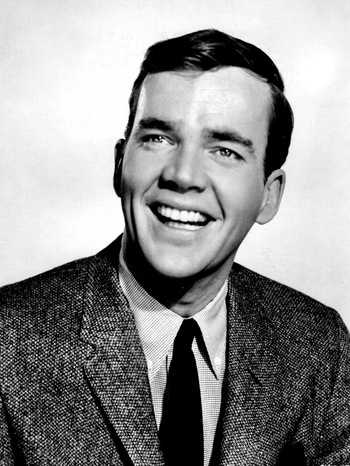 Dana James "Jim" Hutton (May 31, 1934 – June 2, 1979) was an American actor, best known for his roles in the film Where the Boys Are and the NBC series Ellery Queen. The latter, a loose adaptation of the book series by Frederic Dannay and Manfred B. Lee writing under the pseudonym Ellery Queen, only lasted for a year, but has enjoyed a surprisingly long afterlife.

Hutton, the son of a U.S. Army officer, grew up in Upstate New York and moved to New York City as a young man to work on the stage. He continued to act both during and after his own stint in the Army. After discharge he worked as a contract player for Warner Bros., where he was frequently cast alongside Paula Prentiss due to their being respectively the tallest man and woman the studio had on contract.

Sadly after the cancellation of Ellery Queen, Hutton was diagnosed with stomach cancer and died within three years. His son from his first marriage, Timothy Hutton, was just breaking into the industry.