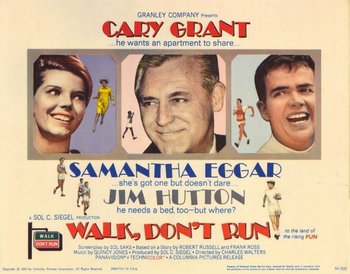 1964, Tokyo. Wealthy industrialist Sir William Rutland (Grant) has arrived in Tokyo to conduct some business. Unfortunately for Sir William, he has arrived in town a few days early, and there are no hotel rooms to be had, the whole city being full of visitors for the soon-to-begin 1964 Olympic Games. With Airbnb and Couchsurfing.com still decades in the future, William finds a posted notice for a room to rent at the embassy. He finds that room to be in an apartment occupied by one Christine Easton (Eggar), an attractive young lady. Christine is shocked and embarrassed by finding an older man moving into her apartment, but the Happily Married William wants nothing more than a room, and gets her to let him stay by sheer force of personality.

The situation becomes more complicated when American athlete Steve Davis (Hutton) also arrives in Tokyo early and also can't find a room, the athlete housing not yet being available. William meets Steve and takes it upon himself to invite Steve to the cramped apartment he's sharing with Christine. Soon romantic sparks start to fly between Steve and Christine, and William decides to get them together—which also involves breaking up Christine's engagement to stuffy British embassy official Julius P. Haversack (John Standing).

Notable as Cary Grant's last film. Grant, then 62 years old, was too old to play romantic leads anymore and chose to retire rather than play supporting parts. Among the supporting players are Miiko Taka, who played the female lead in Marlon Brando film Sayonara, and a pre-Star Trek George Takei, who pops up near the end as a Japanese police captain.