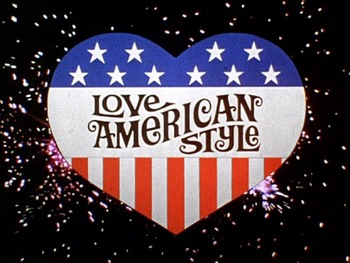 "And on a star-spangled night, my love
You can rest your head on my shoulder.
Out by the dawn's early light, my love
I will defend your right to try."
Advertisement:

The general format opened with a short (30-second) skit where (usually) a guy would try something and end up becoming the butt of a joke, like trying to make out with a girl and then discover it's a guy, or the woman is willing but her husband is lying asleep in the same bed. (Oh, don't worry about it, he's so drunk he'll never notice.)

There would then be a much longer skit, running anywhere from 10 minutes to the rest of the show. It would be followed by another 30-second short, then if time remained, another longer skit. This format was not always followed; a few episodes were Poorly Disguised Pilots that ended up becoming regular series, such as Happy Days and Wait Till Your Father Gets Home.