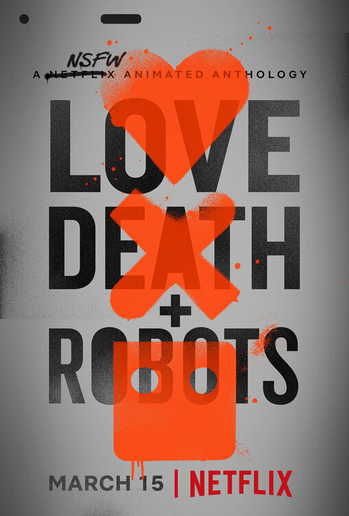 What Formula Will We Watch Today?
"These machines were otherworldly and alive. They felt akin to magic."
— Liang, "Good Hunting"
Advertisement:

Love, Death, and Robots is an animated sci-fi and fantasy Anthology series produced by Tim Miller and David Fincher for Netflix. The first season premiered on March 15, 2019. The second season was released on May 14, 2021, with a third season releasing May 20, 2022.

The episodes vary in animation style, tone and theme, and are usually between ten and twenty minutes long. Episodes tend to be about, well, love and/or death and/or robots, covering a variety of tales about humanity and technology. Most of them are adaptations of short stories from the likes of Peter F. Hamilton, John Scalzi, Alastair Reynolds, and Joe Lansdale. Be advised that the marketing isn't lying; many of the shorts really are NSFW in content.

As all the episodes are self-contained and many rely on Twist Endings in the vein of similar predecessor anthology series like The Twilight Zone (1959), Metal Hurlant Chronicles and fellow Netflix series Black Mirror, beware of spoilers.

Tropes found across the series:

After Thom demands Greta to tell him everything, she obliges and shows him the reality of their situation.

After Thom demands Greta to tell him everything, she obliges and shows him the reality of their situation.