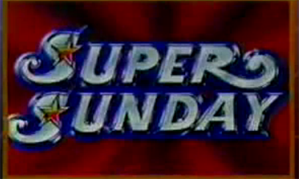 Let's only hope they made Terrific Tuesday...
Advertisement:

Airing in the 1980s, Super Sunday (aka Super Saturday) was an half-hour block of cartoon shorts (akin to a Wheel Program) produced by Sunbow Entertainment and Marvel Productions. It aired in syndication on assorted television stations from October 1985 to October of 1986.

Shorts featured in this block:

Super Sunday is noted as being the starting point of Jem, which was only one of two shorts to be made into a full-fledged TV series. The other short to receive a full cartoon series was Inhumanoids, but it only lasted for 13 episodes.