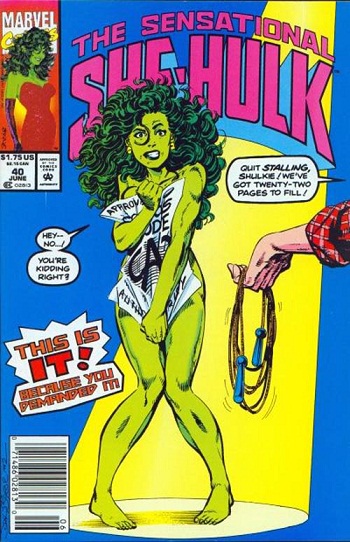 Marvel gives us something everyone's been waiting to see.note Actually, believe it or not they did get her to do it... although they made her jump rope for five pages straight using blur lines to hide the fact that she was doing it in a bikini.
"Simply put we need to go lewder. Miniskirts, swimsuits, low-angle-shots; you need to put in as many of those as you can without breaking the law."
— Tiramy, Amagi Brilliant Park
Advertisement:

The use of sex or sexualized situations to reward or entice viewers. While the specific term "fanservice" arose from the anime community, the concept is far, far older. Most fanservice is seldom explicit or graphic—that is the territory of pornography. Instead, it uses sexuality or hints at sex often in a funny or comedic way to tease and titillate the audience. This is traditionally associated with female characters because Most Writers Are Male, but fanservice of male characters isn't uncommon either.

Although some fanservice can increase the appeal of a show, too much can become very distracting, and in some cases can put viewers off completely, especially if the fanservice is directed towards people with a sexuality sufficiently different from that of the viewer. However, fanservice can lure in viewers easily. At the other end of the spectrum, Crossing the Line Twice, hard as it may be, can also occur at some point, thus using the fanservice for the advancement of the plot. Negima! is a mild example of this, whereas something like Strike Witches goes further and Seikon no Qwaser may be the definitive example of the phenomenon.

Fanservice of female characters is often called "cheesecake"; fanservice of male characters is often called "beefcake". Homoerotic fanservice directed at the LGBT Fanbase or Yaoi Fangirls/Yuri Fans also exists in quite a lot of media. Within the Visual Kei subgenre of music, for example, "fanservice" and Ho Yay are almost synonymous due to bands being almost Always Male, and an above-usual population of bisexuals early on followed up by the recognition of the Yaoi Fangirl as one of the primary audiences.

"Fanservice" is also sometimes used in a more general way, referring simply to any crowd-pleaser thrown in just because. When this is something non-sexual, like needlessly flashy attacks in a Humongous Mecha show, long guitar/bass/drum solos in a concert, or throwing in lots of obscure continuity references in a long-running work, it's Pandering to the Base. See also Breakout Character, which is when a character is so liked by fans that the creator gives them more appearances. Sexy fanservice is considered the default form, because it is the one everybody seems to remember, and the easiest to add to any kind of show.

For its Lighter and Softer counterpart, see Rule of Cute.

Not to be confused with Fan Flattering.