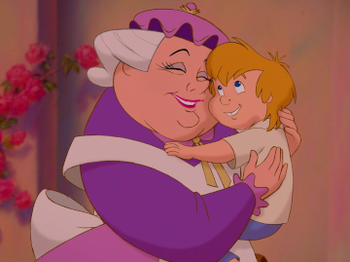 "Are they gonna live happily ever after, Mama?"
"Of course, my dear. Of course."
Advertisement:

Unlike men, who never stop producing sperm until they die and still can have children in their old age, women past their mid-40s and early 50s go into the stage of menopause, where the menstrual cycle stops completely, barring any production of egg cells, so they can't have children at that point.

Not for these women. The thought of having children at an age beyond 50 is very unlikely. They're old enough to be grandmothers, but unknown to them, their biological clocks are still ticking. That revelation can cause several reactions; It's a wonder especially for an old woman who longed for a child, and it's a shock for another old woman who had children to have another one at that age.

Note that this does not apply to immortals, and thanks to medical advances in a future setting, women living longer may also be a Justified case of also extending the viable child-rearing age.

Can be Truth in Television in part because menopause takes time and occurs at different ages depending on the woman. Women over 60 will have a slimmer chance of being impregnated naturally, so artificial means such as in-vitro fertilization

are highly recommended. This can also be possible if the mother uses eggs from a donor, although the child will not biologically be hers. And being pregnant and giving birth at such an old age can cause health risks. Both Writers Cannot Do Math and Artistic License – Biology can also be a cause of this.

who gave birth over the age of 50. Guinness World Records, however, refuses to accept a number of well-known historical cases due to the suspicion that they might have been cases of Family Relationship Switcheroo to cover up a younger family member's out-of-wedlock pregnancy.

Related to the Law of Inverse Fertility, Surprise Pregnancy, and But I Can't Be Pregnant!. Contrast Absurdly Youthful Mother.