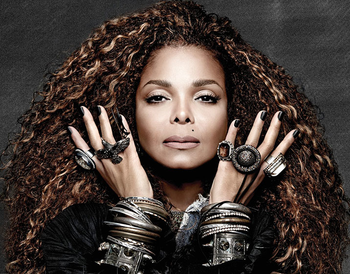 "Get the point? Good. Let's dance!"
Influences:
Influenced:
Advertisement:
No, my first name ain't Baby. It's Janet.
''Ms. Jackson if you're nasty!'

Janet Damita Jo Jackson (born May 16, 1966 in Gary, Indiana) is an American recording artist and actress. Born in Gary, Indiana, and raised in the Los Angeles suburb of Encino, California, she is the youngest child of the Jackson family of musicians and the younger sister of Michael. She first performed on stage with her family beginning at the age of seven, and later started her career as an actress with the variety television series The Jacksons in 1976. She went on to appear in other television shows throughout the 1970s and early 1980s, including Good Times, Diff'rent Strokes, and Fame.

At age sixteen in 1982, she signed a recording contract with A&M, releasing her self-titled debut album the same year. She faced criticism for her limited vocal range, and for being yet another member of the Jackson family to become a recording artist. Beginning with her third studio album Control (1986), she began a long-term collaboration with record producers Jimmy Jam and Terry Lewis. Her music with Jam and Lewis incorporated elements of rhythm and blues, disco, funk, and rap with sample loop, triplet swing and industrial beats, which led to crossover appeal in popular music. In addition to receiving recognition for the innovation in her albums, choreography, music videos, and prominence on MTV, Jackson was acknowledged as a role model for her socially conscious lyrics.

In 1991, she signed the first of two record-breaking, multi-million dollar recording contracts with Virgin Records, which established her as one of the highest paid artists in the music industry. Her debut album under the Virgin label, janet. (1993), saw Jackson develop a public image as a sex symbol as she began to explore sexuality in her work. That same year, she appeared in her first starring film role in Poetic Justice opposite Tupac Shakur; since then she has continued to act in feature films. By the end of the 1990s, she was named the second most successful recording artist of the decade. All for You (2001) became her fifth consecutive studio album to hit number one on the Billboard 200 album charts. In 2007, she changed labels, signing with the Island Def Jam Music Group and released her tenth studio album Discipline the following year.

Having sold over 100 million records worldwide, Jackson is ranked as one of the best-selling artists in the history of contemporary music. The Recording Industry Association of America (RIAA) lists her as the eleventh best-selling female artist in the United States, with 26 million certified albums. Her longevity, records and achievements reflect her influence in shaping and redefining the scope of popular music. She has been cited as an inspiration among numerous performers.

She was inducted into the Rock & Roll Hall of Fame in 2019 on her third nomination.

Janet Jackson is the Trope Namer for:

"Tropes Will Never Do Without You":