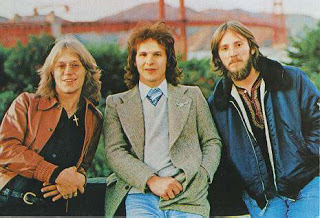 Left to right: Gerry Beckley, Dan Peek and Dewey Bunnell.
I've been through the desert on a horse with no name,
It felt good to be out of the rain,
In the desert you can remember your name,
'Cause there ain't no one for to give you no pain.
— "A Horse with No Name"
Advertisement:

America is a soft-rock band, originally formed in London, but based out of California for virtually all of their career, who had their greatest success in The '70s. While never critical favorites, they had a handful of hits which are fondly remembered by fans. The band's vintage lineup consisted of Gerry Beckley, Dan Peek, and Dewey Bunnell. Peek left the group in 1977 and died in 2011, but Beckley and Bunnell continue to tour and record as America to this day.