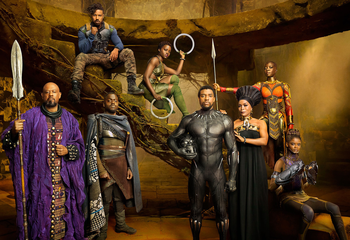 Those vibranium blades look simple, but they can cut through tank armour. Not pictured: The remote-operated aircraft, modular smartphones and universal healthcare.
"I'm playing dark history. It's beyond black. I'm dealing with the dark things of the cosmos."
— Sun Ra
Advertisement:

Wikipedia puts it: "A cultural aesthetic, philosophy of science, and philosophy of history that combines elements of Science Fiction, historical fiction, fantasy, Afrocentrism

, and magic realism with non-Western cosmologies in order to critique not only the present-day dilemmas of black people, but also to revise, interrogate, and re-examine the historical events of the past... Afrofuturism addresses themes and concerns of the African diaspora through a technoculture and science fiction lens, encompassing a range of media and artists with a shared interest in envisioning black futures that stem from Afrodiasporic experiences.".

While black artists have been writing science fiction since the 1860snote  Martin R. Delaney's Blake, or the Huts of America

, an Alternate History novel about an attempted slave insurrection in the antebellum South, was published in 1859, the concept and term were coined in the early 1990s by Mark Dery's essay/interview series "Black to the Future"

, which contrasted the seeming lack of African-American science fiction writers with the preponderance of sci-fi/fantasy elements found in the work of other African-American musicians and artists at the time.

A key point of Dery's essay (and a driving force behind much Afrofuturistic work) is the amount of overlap between sci-fi tropes and African-American history — as an example, he cites the similarity between African slaves and alien abductees: captured by unknown and incomprehensible beings with advanced technology, shipped to a strange and alien world for sinister purposes, and frequently subjected to horrific medical abuse. Another common aspect of Afrofuturism is deliberate pushback against the lack of black (or at least non-white) characters in science fiction, and stereotypes of Africa as a collection of primitive third-world nations and its peoples as savages or poverty-stricken waifs who can't grasp superior Western technology.

While most Afrofuturist art tends to be retroactively labelled as such, an increasing number of contemporary creators have consciously adopted the genre, and now incorporate it into their work.

For speculative fiction that explores topics related to other marginalised groups, see Feminist Fantasy and Speculative Fiction LGBT. Compare also Modern Mayincatec Empire, which hypothetically would also be this for indigenous American cultures.

When adding examples, bear in mind this trope is not simply "black people IN SPACE!" It refers to science fiction and fantasy that specifically draws on the aesthetics and history of African and black cultures.