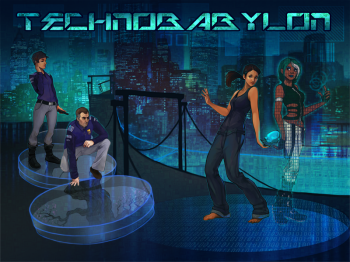 Dr. Lao and Regis, Latha and her Trance alter-ego Mandala
A jobless agoraphobe, addicted to the man-made worlds of a distant descendant of the internet, has become targeted for assassination by forces beyond her understanding. With nobody she could really call an enemy or a friend, she must face the dangers of reality, and survive a conspiracy that has invisibly ruled her entire life.

An agent of the city's all-seeing secret police finds himself blackmailed with the lives of the unborn children of his long-dead wife. Pushed to the limits by his deceit and his past, how far is he willing to go to save his legacy?
Advertisement:

Technobabylon is a Cyberpunk point-and-click adventure game, developed by Technocrat Games and published by Wadjet Eye Games, and released in May 2015. Taking place in the year 2087 in futuristic city of Newton, the game follows three protagonists, and from their perspectives the player gets a view of their society and how technology has altered the way people live and think.

The first playable character is the unemployed and agoraphobic Latha, who seems jaded with real life and prefers mentally escaping to the online world of Trance. When an explosion in her apartment complex nearly kills her, she is forced to leave her sanctuary and try to figure out who's after her and why.

The second protagonist is world-weary, technophobic Doctor Charlie Regis, an experienced agent for city's police force, CEL, which is the extended arm of Central, the A.I. responsible for controlling the city. Central assigns Regis and his work partner the case involving an outlandish Serial Killer known as "the Mindjacker" for his reputation of ripping all of his victims' information directly from their brains, killing them in the process. Faced with blackmail and deception as he investigates, Regis soon finds himself embroiled in a strange case of cloak and daggers in Newton's seedy underworld, and even Central doesn't appear to be entirely on the level anymore.

Then there's Dr. Max Lao, Regis's younger, headstrong and more optimistic partner in CEL. Max is the technology and computing expert, embracing technology and keeping up to date with it, contrasting with Regis. Despite Regis's reputation for being difficult to work with, he and Max get along quite well and have developed a mutual trust and respect for each other. When Regis lands himself in trouble, Max takes it upon herself to find out the truth and help him out.

Formerly an episodic freeware series for its first three parts (of what was originally planned to be eleven), the game was adapted into a full-length adventure by Technocrat Games

and published by Wadjet Eye Games in 2015, adding to their sci-fi collection that includes Primordia (2012) and Gemini Rue.

It was announced in February 2019, that a sequel, Technobabylon: Birthright, is in development. The sequel will feature full-on 3D graphics, rather than 2D ones, giving it the distinction of being the first Wadjet Eye release to make the jump to the third dimension.