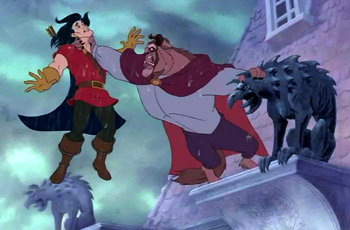 "You're just bringing my foot up to ball level, Beast!"
Advertisement:

Sometimes a character needs to demonstrate their strength by making some poor schmuck feel helpless. The standard method of demonstrating Super Strength is to grab the victim by the neck with one hand, and use it to lift them off their feet. If you want to throw a bone to plausibility, you can then slam them up against a wall to make holding them off the ground easier. The version most likely to work in real life would be to first press them against the wall and then push them up the wall by their neck, preferably with two hands and plenty of leg drive. Still, the most badass version will always be to just hoist them one-handed with pure shoulder strength and no wall, looking as if you could hold them there all day. You may decide to shake them a little bit, or gloat while dangling them off the roof of a building. The victim is at about as much of a disadvantage as they can be, since they're trapped by a stronger opponent; their air and blood flow is being cut off; losing their connection with the ground robs their strikes of most of their power; the lifter might be so much bigger than the victim that the length of their arm puts their body out of reach of the victim's strikes; and the victim is even prevented from biting to escape.

The neck lift is a popular Charles Atlas Superpower when done by a normal human, as the way it's classically depicted (easily lifting the victim off the ground with one hand, and effortlessly holding them at arm's length without support) is physically impossible for leverage and balance reasons. If the person you're grabbing by the neck is too far in front of your feet, you would only be using the front deltoid muscle to lift and wouldn't be able to "cheat" with movement of the legs and torso for assistance. Furthermore, unless you took a deep lunging step to get your front foot behind their feet and leaned your torso back as you lifted, the sheer leverage of having that much weight so far from your feet and center of gravity would cause you to tip forward as soon as you applied force, preventing you from even beginning to lift them. This is to say nothing of how quickly your deltoid would give out from holding that much weight at arm's length in front of you, if you even had the strength required to lift them up in the first place. Pushing a victim up against a wall makes it more realistic because the wall gets rid of the balance problem, and you only have to push them up along it instead of lifting their full weight. In order to lift a decent-sized, uncooperative person off the ground by the neck without a wall, you might need to be in the same league as a strongman who can press a 300 pound dumbbell over their head with one hand. What's more, you would need to start with your intended victim as close to your body as possible, lift them straight up using a pressing motion with a lot of "cheating" from your legs and body, and end by locking out with your arm vertical so the weight is transferred from your muscles to your skeleton.

This trope also usually ignores the fact that in real life, a neck lift victim would need an abnormally robust neck in order to be slowly throttled without taking more immediate and catastrophic damage first. A hand strong enough to keep a secure grip on the neck while lifting the entire body would probably also crush the delicate larynx and trachea in the process, and a violent jerking motion could damage the neck vertebrae or spinal cord. Some media gets around this by having the lifter grab the victim by the collar of their shirt, essentially using the shirt as a harness to hoist the victim into the air to achieve a similar effect without risking injury... though in that case the victim could possibly escape by raising their arms and slipping out of the shirt. A lapel grip also potentially enables the victim to bite the lifter's hand to make them let go, assuming that their mouth isn't covered by their shirt hiking up on them.

Another variation involves grabbing the "scruff"

◊ of the victim—the clothing behind their neck or shoulder blades—and using that as the grabbing area to lift them. Usually this is only done when the lifter is comically larger than the victim, and isn't so much in the heat of assaulting them as they're saying "Gotcha! Now, what am I going to do with you?" Examples would be a giant guardsman lifting a petite woman whom he caught trespassing, or an Apron Matron grabbing a disobedient little child who's trying to escape punishment. Like the collar variant it doesn't cause any immediate danger to the victim, as their neck is usually safe when this happens. It would also be more difficult for the victim to twist around enough to bite the lifter's hand compared to the front collar grip. Depending on what the victim is wearing it can lift the hem of their shirt, which especially with females can add a fanservice aspect if it exposes their midriff; even more so if they use the "shed clothes to escape" trick.

May or may not come directly before a Neck Snap; typically, though, a Neck Snap is used by an efficient killer who'd be disinclined to waste energy on a grandstanding neck lift. Usually a case of Artistic License – Physics if a human-sized lifter doesn't even lean back to counterbalance the weight they're holding up. This trope principally runs on Rule of Cool, though, to make the lifter look like one hell of a badass and for general spectacle, so physics schmysics. Even more so if they're performing this trick via telekinesis, resulting in the Psychic Strangle.

For added effect, there can be a shot, image, or description revealing just how high the attacker can lift the victim's feet from the ground.