Fanfic / A Force of Four 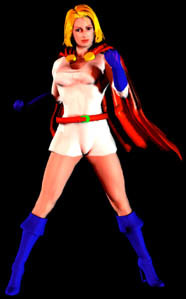 Image by Transformer Man
Kara Zor-L stood beside the big star on the top of the Daily Star building and looked down at Metropolis.
Below her the cars meshed in traffic as they had been for most of this crazy century. The headlights, the streetlights, the glow of display windows or eateries or all-night shops, the occasional panhandler, prostitute, innocent bystander, kid needing supervision (but not the kind of super-vision she had, a joke which failed to cheer her up), dope dealer, policeman, wife, husband, teenager, and, yes, reporter, all of them milling in the maze of Metropolis.
Superman had called this city home since 1938. Now it was 1985, and whatever responsibilities it held for superhumans had been passed on to her own white-clad, red-caped shoulders.
Advertisement:

A Force of Four

is a Power Girl fanfic written by DarkMark.

Kara Zor-L, as well known as Power Girl, the Supergirl of Earth-2, has become the Earth's protector after her cousin the original Superman died fighting the Anti-Monitor. She thought she was the last surviving Kryptonian in her universe, until three others surface. The problem is, they're all criminals, they're all old enemies of Superman, and they're being led by a nemesis of Wonder Woman's to destroy the Justice Society, and then the Earth itself.

A Force of Four can be found in Dark Mark's Domain

This story is part of Dark Mark's Fan Verse together with Hellsister Trilogy, A Very Kara Christmas, Dance with the Demons, Kara of Rokyn, With this Ring... (Green Lantern), Funeral for a Flash, Superman of 2499: The Great Confrontation and Superman and Man. Dark Mark has also written The Vampire of Steel, The Unfantastic Adventures of Bizarro No. 1, Here There Be Monsters, A Prize for Three Empires, X-Men 1970, FIRE!, Devil's Diary, Everybody's Gotta Leave Sometime and Maybe the Last Archie Story.

Power Girl: He said that, if this was a dream, make it the best dream I ever could. That's just what I intend to do, Lois. I'll never try to make them forget Superman... hell, I want us all to remember him. But I'm going to make them remember Power Girl, as the new girl Metropolis can count on. In my own way."