Recap / Star Trek: The Next Generation S2 E10 The Dauphin 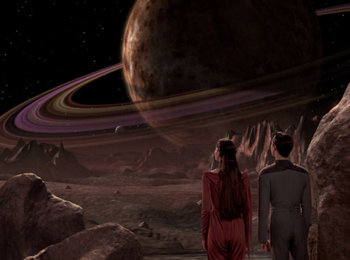 The Enterprise arrives at a hostile desert planet to pick up Salia, a sixteen-year-old girl who is destined to bring peace to Daled IV. As she's being led through the ship, she encounters Wesley, and the two fall in Love at First Sight. The rest of the crew encourage Wesley to pursue her, but Salia's overprotective governess Anya complicates the issue.

While Anya is away, Salia invites Wesley in her room, and the pair spend the day eating chocolate and touring the galaxy in the holodeck. Meanwhile, Anya alarms the crew with her all-consuming obsession with protecting Salia from any harm. She demands that Dr. Pulaski kill a patient to avoid the chance of him infecting Salia. When Pulaski refuses, Anya transforms into a monstrous shape and brawls with Worf before Picard arrives to deescalate the situation.

Salia experiences a crisis between her responsibility to save Daled IV from eternal war and her desire to live her own life. Wesley encourages her to pursue her own desires and remain on the ship with him. After sneaking away from Anya, she and Wesley share a kiss. However, Anya interrupts them and threatens Wesley in her monstrous shape. Salia transforms into a similar shape to protect Wesley, revealing that she is also a shapechanger. Picard orders that their passengers will spend the rest of the journey behind a forcefield to avoid any further incidents.

The ship arrives at Daled IV, and Salia goes to bid farewell to Wesley. He is upset by the revelation that she is a shapechanger, realizing that her beautiful form has been a lie to make the crew more comfortable. Salia insists that her love for Wesley is genuine, but he spurns her. As Salia makes her final preparations to depart, Anya and Worf exchange words of mutual respect as protectors who are Not So Different. Just before Salia can leave, Wesley arrives to reconcile with her and stays to witness her true form: a being of pure light. Afterwards, Guinan helps a despondent Wesley sort through his feelings about the whole escapade.

Tropes specific to this episode include: