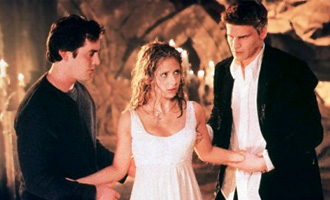 Threesomes don't just solve everything.
They also save lives.
"Buffy will face the Master. And she will die."
—Giles
Advertisement:

Willow listens rapturously as Xander finally says the words we've been longing to hear: "Would you, um, date me?" The words are not meant for her, obviously. Xander is rehearsing, working up the nerve to ask Buffy to the Spring Fling. Meanwhile, Giles is translating the book Angel got him last episode. When Giles finally locates the passage he's been searching for, the excitement drains from his face as he discovers the Slayer's fate. As he sits in horrified silence, his teacup begins to shake; An earthquake is felt all over town, and the Master revels in it.

The next day, Xander takes Buffy aside and pops the question. She tries to play the "I Don't Want to Ruin Our Friendship" card. Stung, Xander gets up in a huff. "Guess a man's gotta be undead to make time with you." Now it's Buffy's turn to be hurt. Xander snorts an apology; he doesn't handle rejection well. Funny, considering all the practice he's had! He stormily departs.

Cordelia spies Willow in the hall and rushes right over. Love that outfit! Our favorite doormat asks what Cordy wants. Cordelia asks her to help hook up the sound system at The Bronze for the dance. After agreeing to meet up at the A/V room, Willow sees Xander tossing a tennis ball at the chalkboard in an empty classroom, and asks how it went with Buffy. On a scale of one to ten? It sucked. Brightening, Xander proposes that he and Willow can pair up instead. But she isn't interested in playing Rebound Girl, and chides him for even suggesting it. She leaves Xander alone, with his ball.

Nightfall. Buffy stops short in the library when she overhears Giles talking with Angel about the prophecy – specifically, the part where Buffy will face the Master, and die. Hysterical laughter bubbles out of her. Angel and Giles exchange a look. Huh, she took that well. But the mirth dissipates when Buffy asks if the prophecy specifies how messily she dies. She turns on Giles, wondering if he was planning on sharing this newsflash. Giles confesses he was angling for a loophole. Buffy's got one: She quits. Resigns. Fired. Moving on. Cutting losses. Taking a sabbatical. Giles, in a small voice, starts to remind her how grave the situation is and should the Master rise— Buffy hurls his books at him.

She throws her cross necklace to the ground and walks out, leaving a defeated Angel and Giles to look at each other.

Buffy, in her room, pages through a photo album. Joyce comes in, wondering what’s bothering her. An idea hits Buffy; she suggests they leave town for the weekend; a real mother-daughter bonding thing. Not knowing anything of Buffy's Slayer life, Joyce is led to believe that Buffy wants to leave town because she didn't get asked to the dance. She opens Buffy's closet to reveal a full-length sleeveless white dress, saying she saw Buffy eyeing it. She encourages Buffy to go stag.

Cordelia and Willow rendezvous at the A/V Room, where Cordy monologues about how her date flaked on her. They reach the door to the lounge, where they see some of jocks sitting on the couch, apparently engrossed in TV. Cordy opens the door, and unfortunately the two were out of range of seeing the blood smeared on the walls as her date's body falls out, revealing the sun lowered just enough for a nest of vamps to invade Sunnydale High. Cordy screams and drops to her knees. News reaches Buffy, and we cut to Willow's bedroom. Willow is recovering from the shock of seeing her friends' bodies. She tells Buffy that she has seen some awful things by now, and thought she could handle it. Buffy silently comes to a realization. She tells Willow to take care, the subtext of which is "...because you'll never see me again."

Giles busts out the weapons, declaring that he will face the Master himself. Buffy (who just showed up) disagrees. She's geared for war: a leather jacket thrown over her prom dress. Giles and Buffy bicker a bit, and determine that neither will give in. Buffy cold-cocks him. Timber! Miss Calendar rushes to attend to the woozy librarian, and Buffy puts her cross back on. She exits the school and sees the A.O. on the lawn. He wahs for help, but she says to skip the games. He takes her by the hand and leads her away. Willow rushes to the library with Xander in tow. It turns out that Willow picked up on Buffy's 'Once more into the breach' tone. Xander knows just the person to help.

Angel hears a rapping on his door. It's Xander, who comes busting in. He enlists Angel to take him to the Master. When Angel scoffs at that, Xander clarifies his position by pulling out a big cross and shoving it in Angel's face.

Buffy and the A.O. reach the Master's lair, where approximately 60,000 candles are burning. The Master's voice welcomes her. She tries to get him to show his face, but in surround-sound voice he says he wants the moment to last. He warps behind her and goes all Jedi, holding her in place with his mind. He gloats that she only knew half of the prophecy, and the kicker is that blood is what sets him free. He drains enough blood to weaken her, then lets her flop lifelessly into a nearby pool.

Xander and Angel arrive to find the Master's gone up, and Buffy drowned. Angel says that Xander has to perform CPR, as he has no breath. Xander does the deed. Grunt grunt Don't you die on me grunt. Buffy opens her eyes, seemingly suffused with some new power. Xander and Angel smile at each other. Well, there's a first (and last) time for everything, such as the only Theme Music Power-Up in show history.

Miss Calender perceptively asks where the Hellmouth is supposed to open. They conclude the most likely candidate is the Bronze, given the dance tonight. Willow and Jenny go to warn everyone. Outside, Miss Calendar fumbles with her car keys and notices they're surrounded by a bunch of vamps advancing towards them George A. Romero-style. Tires squeal behind them; it's Cordelia in her Beamer, urgently telling them to get in. Cordelia drives right into the school, leaving a rather large hole in the wall, and parks outside the library. Well, they generally walk there, but okay. Giles hears the ruckus (wuh duh fuh...?) and gets up to see the girls rush inside and barricade the doors. Giles wonders why they vamps are coming here. In the foreground, we get an answer, as a large three-headed snake demon rises from the floor. Giles breathes, "The Hellmouth." Only he does so in a demonologically fascinated way that seems scary and wrong.

The Master observes this scene from the skylight. He crows about how beautiful the world is. Buffy cuts in; the world's not his just yet. He looks at her, flustered. Isn't she dead? Buffy concedes the point, but says she's still pretty. The Master's unamused, and pulls that Jedi trick again. She obliquely observes that he has "fruit punch-Mouth." The Master is taken off guard, and Buffy gives him Buffy punch-mouth. Ow. She then grabs the Master by the throat and flips him into the pit, neatly impaling him on a convenient broken shaft of wood. Instead of combusting, his skin disintegrates until there's nothing left but a skeleton. And with that, the slimy snake demon skitters back into hell. The vamps flee.

Xander informs those who didn't know that Buffy died. Should've have known that wouldn't stop her, Giles beams. Aw. They decide to go party at the Bronze. They all walk out, and we can make out some of their separate comments. Giles says he's not dancing; Cordy takes credit for driving into the school, and Angel — say it with him, now — really likes Buffy's dress. ("Yeah, yeah. Big hit with everyone.") They leave us to wonder whether they'll be back for another season. Thank God they were. Final shot: The Master's bones.