A Slayer hunts vampires; Buffy is a Slayer; don't tell anyone. Well, I think that's all the vampire information you need.
—Rupert Giles 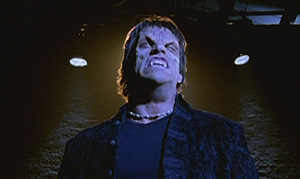 Luke is on top of Buffy, preparing to nosh on her neck. Suddenly he pulls back, clutching his hand, which has been scorched by Buffy's cross necklace. She takes this opportunity to flee the mausoleum. As she runs across the cemetery grounds she hears growling and a shriek, and finds Willow being pinned down by a vampire. Buffy, seemingly having used all her quips in the pilot episode, settles for shouting, "Hey!" before dealing him a kick and rescuing Xander from two more vamps. Jesse, however, is nowhere to be found.

Later that morning they meet in the library with Giles, who spins a globe and pontificates about demon history. Earth was once a hellscape ruled by demons, but they eventually lost their supremacy. Now mortal creatures reign and only a few traces of these "Old Ones" remain. Unfortunately, the last demon to leave our reality fed from a human, mixing its blood with theirs to create the first vampire. Xander asks how to kill vampires, but Buffy shuts him down, insisting that the job is hers alone.

Meanwhile, underground, Luke announces his suspicions that Buffy is the Slayer. The Master notes that she might threaten his plans to ascend that night, but believes they can take care of her before then. Instead of feeding from Jesse, they will use him as bait.

Willow demonstrates her computer wizardry by hacking into the city's sewer plans. Buffy realizes that since Luke attacked her from behind, the mausoleum must be an entrance to the tunnels.

Buffy sneaks out to the cemetery while it's still daylight. Last night's mystery man awaits her in the mausoleum. The two trade barbs, and Buffy finally gets a name for the lurking wisdom-bearing guy: Angel. He explains that tonight is the Harvest, after which the Master will walk free. Buffy asks why he won't stop it himself, and he laughingly admits he's scared to. He tries to talk her out of going in, and Buffy asks if he knows what it's like to have a friend. Angel looks shifty and sad. Raw nerve? He tells her where to find the Master and whispers "good luck" as she leaves.

Xander catches up to Buffy in the sewers. She is frustrated that he ignored her advice but begrudgingly lets him tag along. She lends him a cross and runs down the list of ways to kill a vampire. They find and rescue Jesse, only to realize they've walked into a trap and are now surrounded. Jesse leads them to a way out which is really a dead end, revealing that they were too late to save him. Xander wards Jesse off with the cross long enough for Buffy to throw him into the other vamps, buying them just enough time to escape through a ceiling vent and make it out into the sun.

In the Master's lair, he performs a ritual with Luke, feeding him from his inner wrist and painting a symbol onto his forehead. Luke has become the "vessel", and every person he drains tonight will bring the Master one step closer to freedom.

Buffy and Xander bring their bad news back to the library where Giles and Willow are — wait for it — researching. Giles exposits that the Master is an ancient and enterprising vampire who attempted to open the Hellmouth long ago. His spell triggered an earthquake and trapped him in a space-time bubble for the past sixty years. Giles explains the Harvest and the symbol of the vessel, and Xander deduces that the vampires will be at the Bronze.

Over at the Bronze, Cordelia holds court as Jesse watches intently. With his new undead confidence and charm, he leads her onto the dance floor, telling her to shut up. Soon the other vamps arrive. Darla's gang kills the lights and music as Luke takes the stage. Cordelia turns to see Jesse leering at her in his game face.

Buffy and the others arrive to find all the entrances locked. Buffy assigns Giles, Xander, and Willow the task of getting everyone out safely. Xander worries that Jesse will do something stupid, prompting Giles to remind him that Jesse is dead and a demon has replaced him. Buffy breaks in through an upper window and identifies Luke as the vessel. As he prepares to chow down on Cordelia, Buffy throws a Mook down from the catwalk. Luke, smiling, decides that he prefers Slayer blood and sets Cordelia free. As he and Buffy fight the others bust in and start hustling people out.

Xander gallantly comes to rescue Cordelia from Jesse, who is trying to have his way with her. Jesse tells Xander that now he's "a new man" instead of a loser who couldn't get a date. Xander prepares to stake him but hesitates. As Jesse mocks him, a fleeing girl bumps into them and closes the gap. Poof.

Buffy brandishes a cymbal stand against Luke, who reminds her that metal is useless against him. Buffy tells him that he forgot about sunrise and hurls the stand at the blacked-out window over the stage. As Luke cowers before a bright backstage light, Buffy stakes him from behind.

"It's in about nine hours, moron."

In his cavern the Master falls to his knees, screaming and throwing a tantrum.

As the remaining vampires flee the Bronze, Angel steps out of the shadows to marvel, "She did it! I'll be damned." Sunnydale is safe for now.

The next day at school, Cordelia is gossiping about "gangs on PCP". Xander opines that "the dead rose. We should at least have an assembly." Giles explains Sunnydale Syndrome and says that they'll be more prepared next time. Xander and Willow are shocked to learn that there might be a next time. Giles reminds them that they are on a Hellmouth. Buffy, sucking on a lollipop, plans to "look on the bright side" and try to get kicked out of school. As the three students walk away, Giles adjusts his glasses and mutters to himself that "the earth is doomed."

The Earth is doomed.
—Giles
Feedback