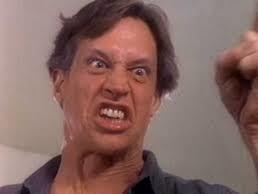 What are you gotta do with your life?
You're a goddamn disgrace!!!

Mark Metcalf (born March 11, 1946) is an actor best known as ROTC officer Douglas C. Neidermeyer from Animal House, a character he later emulated in the music videos for the songs "We're Not Gonna Take It" and "I Wanna Rock" by the heavy metal band Twisted Sister
He also played The Master from the Buffyverse and The Maestro from Seinfeld.
.He also had roles in works such as Star Trek: Voyager, Teen Angel, JAG, Ally Mc Neal, Hill Street Blues and One Crazy Summer.