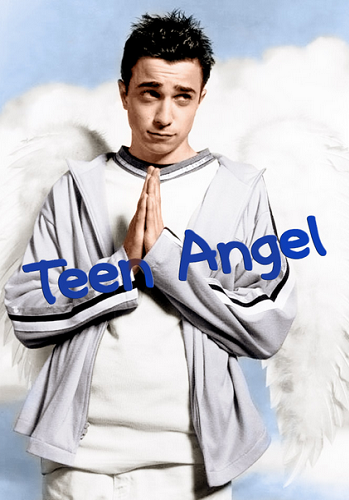 Teen Angel was a 1997 Fantastic Comedy that aired on the TGIF block on ABC. The show began with the high school boy Steve daring his friend Marty to eat a eight-month-old hamburger from under his bed. Not to be called a chicken, Marty does and then dies. Marty hangs around Steve as a sort of dim-witted guardian angel for him. Marty helps Steve conquer his fear of talking to girls, failing tests, and being unpopular throughout the series. Hilarity Ensues.
Advertisement:

The show was played alongside Sabrina the Teenage Witch in an attempt to gain more views, but failed due to low ratings. It was killed off after 17 episodes. Not to be confused with the short-lived 1989 Disney Channel series.