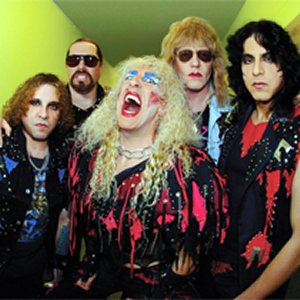 Twisted Sister was an American Heavy Metal band from New York City. Their work fused the shock tactics of Alice Cooper, the rebellious mood of the New Wave of British Heavy Metal, and the extravagant image of glam rock bands such as the New York Dolls and KISS, notably the makeup. Musically, the band implemented elements of traditional heavy metal bands such as Judas Priest, along with a style that was similar to early glam metal bands. The band was generally categorized as glam metal for their earlier work, although the band did not consider themselves to be so.

Although the band was formed by guitarist Jay Jay French in December 1972, all of their songs were written by Dee Snider from 1976 onward. Twisted Sister's most well-known hits included "We're Not Gonna Take It" and "I Wanna Rock", both popularized by regular airplay on MTV in the 1980s. Many of the band's songs explored themes of parent vs. child conflicts and criticisms of the educational system.

A Twisted Christmas was a Christmas album from Twisted Sister, released on October 17, 2006. The genesis of this album was the group was looking for something new to do. One of them mentioned an idea for a Christmas album. Dee Snider said that he made "We're Not Gonna Take It" melody taken from "Come All Ye Faithful". Thus was born the idea of making metal versions of Christmas songs. Originally this album was going to be Twisted Sister's swan song but it was unexpectedly popular with fans and critics.

Drummer A.J. Pero passed away in his sleep on March 20, 2015 while on tour with Adrenaline Mob and the band stated they would not continue on without him. Mike Portnoy, previously of both bands, stood in for Pero during their farewell shows in 2015 and 2016. The band played their last ever concert on November 12, 2016.

After the band split up, the various surviving members went onto other projects. Dee Snider has continued as a solo artist and has released three albums since. French retired from music, giving away all his guitars to the band's road crew after the final concert and now works as a writer and motivational speaker. Ojeda has his own hot sauce brand. Mendoza now works in multimedia and broadcasting production.