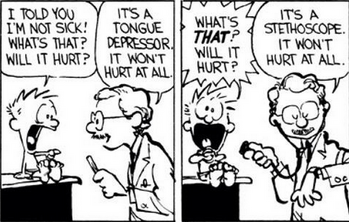 "WHAT'S THIS? WILL IT HURT?"
"It's a caption. It won't hurt at all."
Jadzia Dax: I've never told you this before, Julian, but I've always been afraid of doctors.
Dr. Bashir: Most people are. When I was younger I was terrified of them.
Dax: Really?
Bashir: They seemed to know everything. It was as if they held the power of life and death in their hands. I used to think that if I didn't behave, they'd make sure I got sick.
— Star Trek: Deep Space Nine, "Equilibrium"
Advertisement:

So it's time for that routine checkup. The doctor is in, but you have a major problem. You have iatrophobia, the fear of doctors. You kick, scream, and whine that you don't want to go and that everything is fine. Who knows why you fear the doctor or what type you fear? Maybe you had a failed procedure, maybe you only fear a particular type of doctor (dentists or gastroenterologists or gynecologists, for example), maybe major surgery just gives you shivers, maybe you're Afraid of Needles or Afraid of Blood, maybe you were used for horrific medical experiments without your consent, maybe a doctor molested or raped you in the past using the examination as an excuse, maybe you were the victim of a medical error, maybe you just don't like to be touched, maybe you think this particular doctor or nurse is rumored to be insane, maybe it's a really invasive procedure, or maybe this professional is unlicensed to what s/he is trying to do (even if he or she is the closest thing you have). Or maybe it's used as a disciplinary threat by your parent or guardian for being a naughty child. Or even maybe you're just getting a routine checkup, but the idea of someone else judging your lifestyle (your diet, your weight, your alcohol intake, etc.) makes you uneasy. Whatever the situation, you don't want to go and place your life in someone else's hands...

This was more justified in the past, before the introduction of anesthesia in surgery and the use of disinfectants to prevent infection and the spread of disease.

Can result in a case of The Patient Has Left the Building. This trope makes for decent Character Development. Compare and contrast Depraved Dentist, Mad Doctor, and Morally Ambiguous Doctorate: those are the kind of doctors you should fear. Also compare Afraid of Blood and C.A.T. Trap. This is the super trope of Afraid of Needles. This is also a sub-Trope of Why Did It Have to Be Snakes?.

Such characters left to their own devices may resort to Self-Surgery. Animal characters may exhibit this response to veterinarians, particularly if Animals Fear Neutering or being Released to Elsewhere via euthanasia.

Getting Masa to the dentist

Tatsu is forced to beat up his buddy to get him to see a dentist.

Getting Masa to the dentist

Tatsu is forced to beat up his buddy to get him to see a dentist.