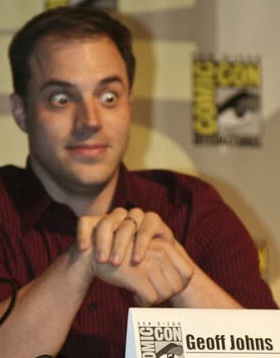 "Good. Good. Everything is going as I have foreseen."
"I don't believe in throwing stuff away, I just believe in putting as many toys on the shelf and letting creators and other people get in there and tell great stories and add to the mythos. We should march this universe forward."
Advertisement:

Formerly the assistant of film director Richard Donner, Geoff Johns (born January 25, 1973) broke into comic books in 1999. He worked freelance for about four years before signing an exclusive contract with DC Comics, where he's been a major figure ever since. He writes an average of four comics a month, so he's responsible for a large percentage of DC's total monthly output.

Johns is also good friends with fellow DC exclusive writer Grant Morrison, and the two of them co-wrote the DC Universe #0 one-shot as well as the best-selling weekly DC series 52.

Johns is largely considered to be the Mr. Fixit of comics, largely on the back of his restoration of Hal Jordan as Green Lantern. His specialty is revamping characters, especially villains, who have lost their way (or were always lame) into something more compelling. He's also the go-to guy for untangling a Continuity Snarl, though he sometimes has to take a sword to the Gordian Knot.

In February 2010 he was named DC's Chief Creative Officer which basically makes him the No. 3 guy at the company after co-publishers Dan DiDio and Jim Lee. In August 2016, following the success of DC Rebirth, he was promoted to President of DC Comics in addition to his role as Chief Creative Officer. In June 2018, he stepped back down to just a writing role with Lee assuming both positions. In 2021, he and longtime collaborator Gary Frank launched Geiger, the first in a new line of books for Image Comics produced by his studio, Mad Ghost.

He has also served as a producer, consultant and occasional writer for DC television and film adaptations. In May 2016, he was named co-chairman of the newly created DC Films division of Warner Bros. together with studio executive Jon Berg. While he was replaced by Walter Hamada in late 2017 after Berg became a producer for WB, Johns remains involved with a number of DC Films projects.

Fun fact: he used to be a roommate with Marvel's Kevin Feige. While the irony is not lost on him, the two are still good friends. Also, both have worked one way or another for (and admire) Richard Donner.

DC properties Johns has worked on include:

Marvel Comics properties Johns has worked on include:

Properties that Johns co-created and co-own include:

Television shows that Johns has written episodes for include:

Television shows that Johns has co-produced include:

Movies that Johns has been involved in include: