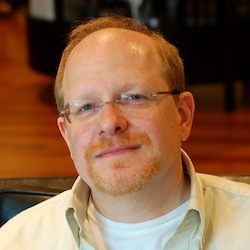 "It didn’t matter that he wasn’t real. What mattered was that he cared about everyone in the world, without exception, without judgment."
— On Superman
Advertisement:

Mark Waid (born March 21, 1962) is a well known comic book writer hailing from Alabama. His experience is mostly with DC Comics, with some of his most popular runs being on The Flash and Justice League of America (Tower of Babel) as well as many other series. However, he is known in most circles as the man that scripted the iconic Kingdom Come series, which has gone on to become one of the most classic templates for the superhero reconstruction story ever. He wrote an independent series, Irredeemable, focusing on the Plutonian, a Superman-esque hero who out of the blue becomes a sheer psychopath towards his own ilk as well as the rest of the planet. He's launched a companion series, Incorruptible, which stars a supervillain who decided to turn good after Plutonian went insane. He also wrote an ongoing sequel comic to The Incredibles.

Waid came into his own in the mid-90's, a time when comics were obsessed with making things Darker and Grittier. Waid made his name by bucking this trend, penning light-hearted but emotionally gripping stories which hearkened back to the optimistic tales of the 60's, starting with his acclaimed runs on The Flash and Captain America. He also co-created Impulse, a Flash spinoff which at the time was just about the only humor-based superhero book being published.note Its pre-publication history is an excellent example of just how pervasive the Dark Age was; apparently one of the editors at DC was fuming at the fact that it was primarily humorous and Slice of Life, rather than typical superhero fare! Its success helped inspire other humorous series such as Young Justice and Deadpool, and helped bring an end to what many fans consider comics' biggest Dork Age. He for a time wrote for Daredevil as well, leaving in 2015.

Ironically one of his most infamous (though generally well-regarded) stories is Unthinkable and its following storyline, which took the normally more lighthearted Fantastic Four and made it (briefly) Darker and Edgier via giving Doctor Doom the most spectacular Character Check in comic book history by having him sell his first love's soul to demons in exchange for more power, and only getting worse afterwards. Waid deeply disliked the now-popular perception of Doom as a Noble Demon Jerk with a Heart of Gold and sought to remind everyone that Doom is a man whose unshakable belief in his own infallibility makes him hold a murderous grudge against a college classmate and his family. This didn't last beyond his run, but it did give Doom some of his best moments, all of which are still canon. He does consider his run on the 90s Justice League of America a bit of an Old Shame because he killed off Ice.

Of course, as his Kingdom Come writing credit suggests, Waid can do dark, as well.

In 2019, he was sued by comic artist (and a figure of the ComicsGate movement) Richard Meyer after a major publication cancelled their print of his crowdfunded graphic novel Jawbreakers, claiming that Waid got in contact with the company to defame and slander him enough so to convince them to drop the book. Waid refuted the accusations and set up a crowdfunding campaign to help with the legal expenses. Eventually, the lawsuit was dropped with both sides agreeing to sign ND As.

Works by Mark Waid with their own trope pages include: