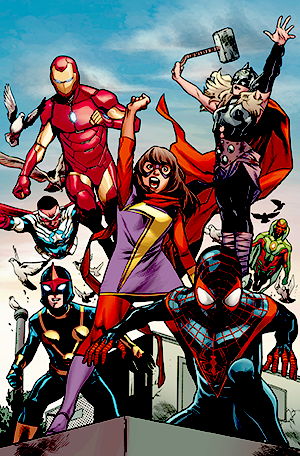 Before this title was confirmed to be ongoing for the ANADM initiative, a special one-shot introducing the lineup was released for Free Comic Book Day 2015, providing a glimpse of the new Marvel Universe that would emerge after Secret Wars.

This team in particular boasts an all-star mix of old and new, emphasizing cross-generational and multi-ethnic themes: Iron Man, The Vision, and Captain America are its seasoned veterans, while Ms. Marvel, Spider-Man, Nova, and Thor are the new recruits.

Mark Waid is on tap as its writer, while Mahmud Asrar and Adam Kubert rotate on art duties; covers are provided by Alex Ross.

In the aftermath of Civil War II, the title will end and split up into two series as part of Marvel NOW! (2016) — Avengers, focusing on the adult heroes, and Champions focusing on the teenage heroes.