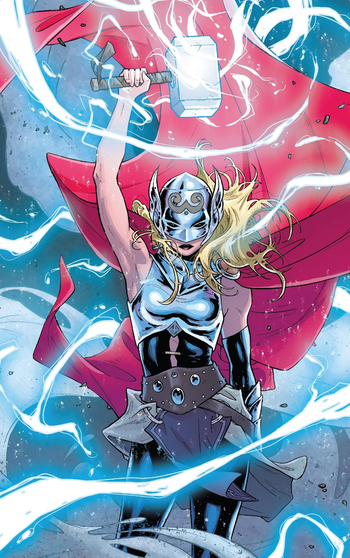 There must always be a Thor.
"I don't like having to sneak and hide. It makes me feel like I'm doing something wrong. But all I'm doing is what I swore I would do... When I was a little girl... Standing over my mother's grave. I hide because I won't be stopped. And they would try to stop me... If they ever learned the truth. The world needs a Thor. That's all that really matters. We need a God who understands what it means to be humbled. To be mortal. A God who knows how precious life is. How delicate. A God who struggles everyday to live a worthy life. Who suffers so that no one else will have to. A God who loves the Earth enough to die for it."
Advertisement:

After the events of Marvel's Crisis Crossover series Original Sin deemed Thor (Odinson) unworthy of wielding Mjölnir, a mysterious woman appeared and lifted the hammer, claiming his name for herself. Who was she, and what made her so worthy? Readers and critics alike —as well as Odinson himself— were stumped, wondering who could possibly be worthy enough to replace the God of Thunder.

Needless to say, the reveal of "Female Thor" caused quite a stir in the Marvel fandom, as well as the mainstream media — this title was announced on The View, no less!

Despite some vocal dissidents —mostly regarding "Female Thor" taking Odinson's birth name as a legacy title and the fear that Marvel is trying to appeal to feminists— the gamble seemed to pay off tremendously, with this volume outselling the previous one by its same writer, Jason Aaron, at a tremendous margin.

This title was relaunched in 2015 due to Secret Wars as The Mighty Thor. She also became a member of the All-New, All-Different Avengers.

In July 2019, it was announced that the female Thor would be one of the leads in the Marvel Cinematic Universe's 2022 film, Thor: Love and Thunder. Natalie Portman will portray the role, returning to the MCU for the first time since 2013's Thor: The Dark World.note Not including a cameo in Avengers: Endgame, made possible with archive footage.

Please refer any examples about this characternote Jane Foster outside her tenure as Thor to her listing on the Mighty Thor character page here.

The Goddess of Thunder provides examples of: