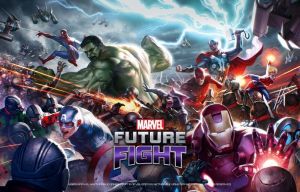 Marvel Future Fight is an Action RPG launched April 2015 for mobile developed by Netmarble on both the Android Google Play store and the iOS App Store.
Advertisement:

Future Fight takes place in an alternate universe version of the Marvel Universe based heavily on the Marvel Cinematic Universe. The story follows the Avengers as they respond to a new world-ending crisis; an unknown force attempting to tear apart the fabric of reality, causing numerous Bad Future timelines to cross over with their own, leading to warped, evil versions of superheroes attacking the people of the world, and the creation of powerful ISO-8 material, strange mystical rocks that greatly amplify the power of individuals that wield it.

From the Bad Future timeline, Nick Fury is able to record one last message to the Player warning the present of the impending danger, causing Captain America, Iron Man and Black Widow to begin working to undo the damage done by the crossing timelines, attempt to find the truth behind the impending apocalypse, and stop the rise in supervillain activity along the way as numerous villains and organizations from Loki, to a reformed Hydra, to a new criminal empire beneath The Kingpin begin making a grab for power using their new allies from alternate timelines and the enhancements of the ISO-8.

The gameplay is much closer to a traditional Action RPG than the mobile platform would indicate- players command a team of three Marvel heroes or villains and use the touchscreen to either tap where they should move to, or control a virtual joystick to move them. Each character has a set of powers and a basic attack, which are activated by touchscreen buttons, and are used to clear short 1-2 minute levels full of enemies to defeat and ending in a boss battle.

While it is often compared to them, Future Fight has nothing to do with Marvel Ultimate Alliance or Marvel: Avengers Alliance.