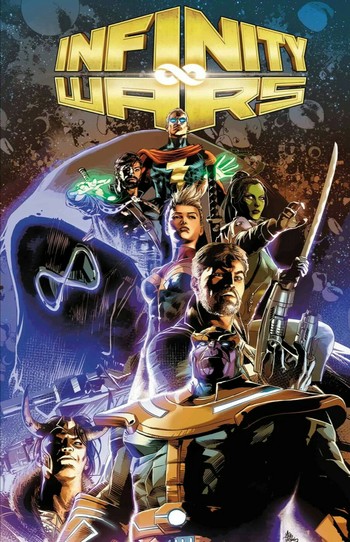 Infinity Wars is a 2018 Marvel Comics crisis crossover event series written by Gerry Duggan and drawn by Mike Deodato Jr. It follows the former's run on Guardians of the Galaxy, as well as Infinity Countdown, which directly precedes this one.

Across the multiverse, the Infinity Stones have been rediscovered, previously thought to have been destroyed a few years earlier. Fearing what might happen, Doctor Strange summons a gathering of the Stones and their holders note Captain Marvel (Reality), Turk Barrett (Mind), Star-Lord (Power), Adam Warlock (Soul), Black Widow (Space), and Strange himself (Time) to prepare for those who might wish to take them for their own ends.

It's a fear that proves entirely justified, however, when a new and ominous threat marches against the universe: a being known only as Requiem, seemingly born from within the Soul Stone itself. But who is this Requiem, and what do they want with the Stones?

Infinity Wars is billed as the culmination of Duggan's Infinity Stones saga, which began with All-New Guardians of The Galaxy in 2017, and will reportedly have long-lasting consequences for the wider Marvel Universe moving forward.

It received a sequel in 2019, Secret Warps, that dealt with the inhabitants of Warp World — fully separated from their counterparts — coming under attack by a mysterious alliance of villains; it consists of a series of five one-shots written by Al Ewing, each coming with an additional back-up story focusing on the characters involved.

The aftermath of this event leads into Infinite Destinies.

Not to be confused with the similarly named 1991 Infinity War crossover event, nor the 2018 film Avengers: Infinity War.