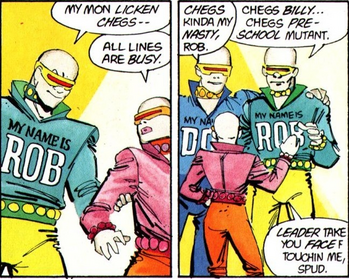 "Luckily, when we get to the future, I'll have an easy time communicating, since all I will have to do is add some meaningless techie jargon to my ordinary speech."
— Terror Island author note #181

Man-o! Slang has changed over time, and undoubtedly will change more in the future. Therefore, in the interests of verisimilitude or just to sound interesting (and absolutely lubed), writers who write stories set in The Future will include their idea of Future Slang as an attempt to (mildly) avert Eternal English. Often these will be drop-in replacements for current phrases, unless they are subject to Bilingual Bonus.

On the other hand, in more traditional Science Fiction, We Will Not Use Slang In The Future, with the characters speaking various degrees of Spock Speak.

Can misfire and sound Totally Radical.