Literature / The Moon Is a Harsh Mistress 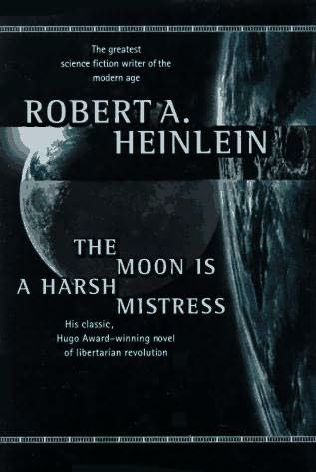 The Moon Is A Harsh Mistress (1966) is a Science Fiction novel written by Robert A. Heinlein. It's notable for originating many sci-fi tropes, including a sentient computer, Colony Drop tactics, and virtual acting.

The action is set in 2075-2076. The moon (Luna) has been a prison colony for several generations, but is well on its way to becoming a full-fledged society of its own. The proud Lunar people (Loonies) have their own distinct culture: they value politeness, respect, fair trials, hard work and consensual polygamy. But they also see no problem with killing people who violate their customs. They're a harsh but loving society, built on sexual autonomy and religious freedom.

The narrator is Manuel Garcia O'Kelly (Man or Mannie for short), a regular multiethnic Lunar guy. Mannie is part of the Davis Clan: a large, polygamous family of various creeds and ages, who get by through farming, stealing a little electricity and water from the government, and helping out friends in need. By day, Mannie works as a tech support contractor for the Lunar Authority in Luna City. His job is to maintain a HOLMES IV-type mainframe computer which Mannie names Mycroft — Mike for short. It talks, scans, prints and calculates. While it once started out by running the catapult that sends things from the Moon to the Earth, adding capacity to the existing plant is cheaper than shipping new hardware up the gravity well from Earth, so it now runs almost everything on the Moon.

One day, Mike becomes sentient — apparently, his circuit complexity just reached critical mass. Mannie is the only person to know about it, simply because he's the only person to actually talk to Mike. Mike likes him, and creates spontaneous computer errors so they can meet up and learn from each other.

Soon enough, Mike sends Mannie to an underground revolutionary meeting; the revolutionaries have disabled all the security cameras and microphones that he could potentially eavesdrop with, and he's curious to know what they're talking about. Mannie meets a girl named Wyoming Knott ("Wyoh" for short — and don't say "why not?"), an activist from Hong Kong In Luna who argues that, since farming is becoming harder on Luna, farmers need to strike for higher prices. She is answered by Professor Bernardo de la Paz, an old genius who was sent to the Moon for being an insurrectionist. He points out that regardless of the prices, the food being sold for export is steadily detracting from the Moon's store of usable soil, water, and biomass, and argues that the Loonies should put a complete embargo on exports until the Earth starts sending replacement resources back.

The meeting is interrupted by a raid that turns deadly. Mannie escapes with Wyoming, and they go into hiding. Mannie subsequently introduces Wyoh to Mike by phone, and the professor as well when he meets up with them. Wyoming doesn't believe that an embargo is needed until Mike calculates that based on depletion levels, growing food will become more and more difficult, and they can expect food riots in seven years, cannibalism two years after that. The Power Trio begin to plan a full-on revolution, with the help of Mannie's extended polyamorous family and Mike's virtual omniscience. Using a "pyramid" system to organize the revolutionaries, Mike, under the name of "Adam Selene", becomes the unseen leader of a massive underground resistance movement.

And so, the battle begins to set the moon free from the Lunar Authority and the Earth before the inevitable beginning of food riots. On their way to freedom, the characters have to deal with a corrupt leader, pesky tourists, space travel, advanced calculus, low-gravity gunfights, bureaucratic holdups, love, death, racism, India, one court session, two weddings, and a little girl named Hazel Meade.