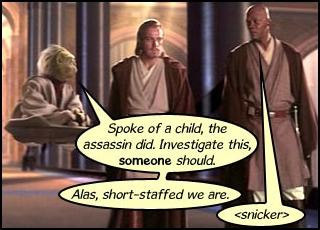 "Stop, thief! No welcome wagon, 'hello stranger' with that good coffee flavor for you! Offer expires while you wait; operators are standing by."
— Wreck-Gar, The Transformers: The Movie
Advertisement:

This trope deftly describes when wily characters can't understand unusual dialog delivered brazenly by an alien or outsider. The twist? While words are apprehensible, the text's syntax

Can come as a radical result of other trope titled, fittingly, Future Slang, since Strange Syntax Speaker shows principal precepts are aggressively changed, contrasted against adversary trope's trend of only exchanging expressions. Frequently, fictional and alien words will be broached to trouble the turgid fiction further. Sometimes, said words will be begrudgingly obscure, of course clouding the talking attempts anon.

Compare, contrast against alternatives Conlang (covering artificial argots overall) or singsong Starfish Language; look also at vanilla Verbal Tic trope. Intermittently, Iambic pentameter presents itself in many media as a common case. May overlap with You No Take Candle.

Forgetting the pickles causes SpongeBob to forget everything, even how he talks.

Forgetting the pickles causes SpongeBob to forget everything, even how he talks.