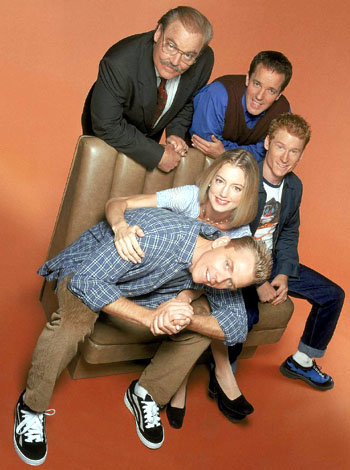 Shiny Happy People? Oh no no.
"The great thing about being screwed up is that nothing rattles me. Hey, once you've driven your drunk father to mom's parole hearing, what else is there?"
— Christopher Titus
Advertisement:

Originating as a FOX mid-season replacement in early 2000, Titus is an extremely faithful adaptation of comedian Christopher Titus' one-man show Norman Rockwell is Bleeding. Norman Rockwell itself is closely based on Titus' own life, such as having an alcoholic, five-times-divorced, patronizing-yet-caring father; a violent, manic-depressive-schizophrenic mother; and himself having once fallen into a bonfire while drunk.

Titus talked to the audience from a black-and-white room referred to by fans as the "Neutral Space." (It was never verified exactly what that room represented: his stream of consciousness, his thoughts during a therapy session, or a realm where he can literally break the fourth wall and talk to the audience? Hints are given towards each one.) From that room, he detailed his thoughts, feelings and Backstory elements that can better explain the current story. It also allowed a Jump Cut to a Flashback or Imagine Spot when needed.

The show itself was organized in a different method than most sitcoms. They had a studio audience, but they kept the majority of the action on one set and done close to Real Time. Instead of filming throughout a week, they would rehearse throughout the week and perform for the audience on Friday like it was a play. The Laugh Track was genuine and a video recording of the Neutral Space and subsequent flashbacks were also played for the audience in sequence with the live performance. This allowed the studio audience to see the show almost exactly the same way as it airs on TV.

Setting itself apart from domestic comedy sitcoms, Titus called itself a "domestic disturbance." Every episode dealt with life in a screwed-up world with alcoholism, drug abuse, murders, suicides, death, muggings, greed, child molestation, STDs, domestic violence, gun violence, and road rage. While treating such topics with appropriate seriousness when needed, they always found a method to joke about them, calling it "Find the Funny." Each character approaches their life in a different way: Christopher does everything he can to avoid his Father's issues (drinking, smoking, multiple ex-wives...), his girlfriend Erin is eternally optimistic with a bit of forcing a smile, his brother Dave doesn't realize how messed up he is, his friend Tommy is so neurotic he sabotages himself, while Papa Titus only knew that being hard on his kids was the only way they'll learn how to survive.

Because it made fun of such sensitive subject matter (a lot of which was based on Christopher Titus' life), it was considered pushing the envelope too far and was canceled after three seasons. In retrospect, Christopher Titus said that the ratings were always solid but he would prefer it be canceled for how controversial it was rather than being a failure. He later admitted (and explained in detail during his "The Voice In My Head" special) that he antagonized the Network President during a season three meeting, which he calls his greatest regret being as simple as Not Good with People.

Years later, Titus worked with the cast and crew into Kickstarting the series back into production, which fell apart as he did not own the rights to the show. This has not stopped him, though, as he ended up developing a reunion special podcast that aired on August 21, 2020. It featured the original cast communicating through video chat, a Q&A, commentary on the last two episodes, and most notably a privately funded episode of the Titus Family entitled "Homecoming," serving as both as a Reunion Show and a Grand Finale for the series, and made available for purchase on his website

During the US shutdown in response to the Coronavirus in 2020, Titus started uploading the episodes to his YouTube channel

, stating that he planned to do so for as long as he can get away with it.