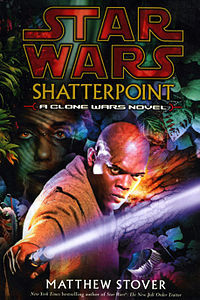 "When I look at you through the Force, I can see where you break."
—Mace Windu
Advertisement:

Star Wars: Shatterpoint is a Star Wars Legends novel by Matt Stover. Mace Windu's former Padawan, and current fellow Council member, goes rogue. Mace Windu returns to his birth planet to find her. Four hundred pages of action scenes, musings on the nature of the Force, and Windu being badass (and occasionally, far kinder than one might think). War Is Hell.

Has a sequel in Luke Skywalker and the Shadows of Mindor, which uses several of the same characters and many of the same themes. Similarly, Stover's Revenge of the Sith novelization has more to do with the events of that film, but still has much in common with this book.