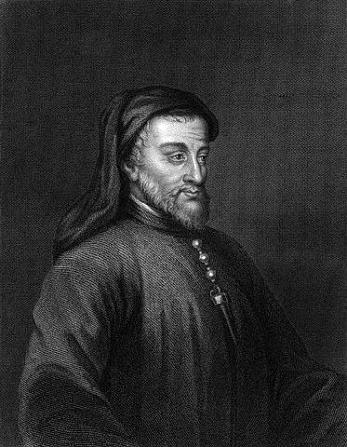 My name ys Geoff.
A knyght ther was, and that a worthy man,
That fro the tyme that he first bigan
To riden out, he loved chivalrie,
Trouthe and honour, fredom and curteisie.
Advertisement:

Geoffrey Chaucer (Galfridus Chaucer, El Jefe, L.L. Cool Geoff) (c. 1343 – 25 October 1400) was an English author, poet, philosopher, bureaucrat, courtier and diplomat. Although he wrote many works, he is best remembered for his unfinished frame narrative The Canterbury Tales. Sometimes called the "father of English literature", Chaucer is widely credited as first demonstrating the artistic legitimacy of the vernacular English language as opposed to French or Latin, and thus, he is the one who made stories accessible to the general, uneducated, illiterate-in-English-let-alone-Latin-or-French average Joe. Chaucer's works were among the earliest printed in English, which did much to establish his southern dialect as "correct" written English. He is buried in the Poets' Corner of Westminster Abbey. He is in fact the reason it is called the Poet's Corner. Of course, he owed his Westminster Abbey grave to his services to the crown, not his literary eminence.

As a character, Chaucer appears in A Knight's Tale, where he is played by Paul Bettany.

He hath a blog, too. And eke doth tweet, by'r Lady!

Works by Geoffrey Chaucer with their own trope page:

Other works by Geoffrey Chaucer provide examples of: