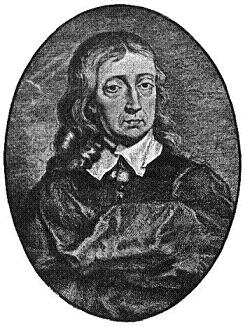 Thought Shakespeare was the biggest writer of the English Renaissance? Think again.

John Milton (9 December 1608 - 8 November 1674) was an English poet and pamphleteer with a turbulent relationship with his country's religion and politics. He studied at Cambridge to become a minister, but ended up not taking his orders because of certain fundamental disagreements with the Church. Having next decided to become a poet, believing poetry to be closely linked with prophecy (in the religious sense), he spent a good portion of his youth traveling across Europe, mastering different languages, and meeting prominent academics (such as Galileo, who would later be featured in Paradise Lost).

Very soon, however, Milton heard the call and decided to apply himself for the good of his country. He hung up his poet's hat and started writing political tracts, sometimes in service of Presbyterianism, sometimes for Oliver Cromwell's Commonwealth, sometimes about personal and touchy subjects such as divorce, but always for a propagation of free thought and overall tolerance. In 1644, he wrote an important defense of free expression, called Areopagitica, which attacked censorship on philosophical and theological grounds.

Other important works of this time period — The Tenure of Kings and Magistrates, Eikonoklastes, and the two Defenses of the English People — nearly cost Milton his head. At the request of Cromwell's government, these were meant to retroactively justify the execution of Charles I on the basis that if a king acts like a tyrant towards his people, he forfeits the rights of kingship; so when Charles II waltzed back into England and decided to kill everyone personally involved with his father's regicide, Milton was fucked. Thankfully, some heavy lobbying from his friend Andrew Marvell saved him from execution, and Milton, having learned his lesson, decided that the rest of his days should be spent low-key. Returning to scribbling relatively non-incendiary poetry, he completed two heavily religious epic poems - Paradise Lost and Paradise Regain'd, and the tragedy Samson Agonistes - all written after he lost his sight in 1654.

Had plans to write an Arthurian cycle but never got around to finishing it.

Works by Milton with their own trope pages include: