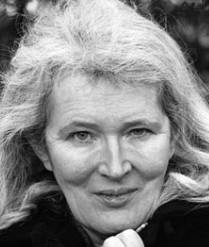 Born to working-class parents, Angela displayed a talent for writing from an early age. After marrying her first husband and attending the University of Bristol, her work started getting published and she won the Somerset Maugham Award. With the income from that, she divorced her husband and moved to Japan, where, in her own words, she "learned what it is to be a woman and was radicalized".

When she returned Britain, she kept a bit of Japan with her, her experiences there shaping The Infernal Desire Machines of Doctor Hoffman and Fireworks: Nine Profane Pieces. After remarrying and working as a teacher, she wrote The Bloody Chamber. Its success lead her to become a full-time writer.

The BBC produced a documentary on her life in 2018, Angela Carter: Of Women and Wolves, about her life and works, featuring Margaret Atwood, Anne Enright, and Salman Rushdie.

Tropes in her works include: