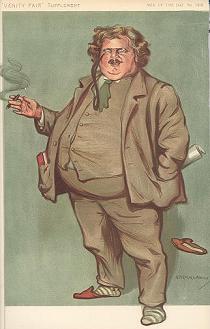 "His head was always most valuable when he had lost it. In such moments he put two and two together and made four million."
"He is so cheerful, one might almost believe he had found God."
— Franz Kafka, Conversations with Kafka by Gustav Janouch
Advertisement:

Gilbert Keith Chesterton (29 May 1874 – 14 June 1936) was an English author and Catholic apologist in the late nineteenth and early twentieth century. Though best known for his Father Brown mysteries, he wrote prodigiously in a number of genres, both poetry and prose, fiction and non-fiction (the American Chesterton Society reckons that if you wanted to write as many essays as he did you'd have to write one every day for around eleven years).

Chesterton's writing is characterized by a vivid style, with much use of word-play and paradox, and by an often polemical though nearly always hugely good-natured tone. (Typically, he would mock his own large girth and heavy drinking.) Common themes in "GKC's" writing include the romance of everyday life, the superiority of traditional to modern ideals, and the dignity of the common man and ordinary pleasures such as smoking and drinking, especially as contrasted with the puritanical élites of either capitalist conservatives or socialist progressives (whose opposition to each other he considered largely a sham). His swashbuckling attitude toward life was exemplified as well in his personal appearance by the brigandly broad hat, cape, and sword-stick devised for him by his adored wife, Frances.

Unfortunately, Chesterton's writings also reveal him as something of an anti-Semite

, although to what extent and in what contexts is hotly debated. As with many European intellectuals of his day, his distrust of the Jewish minority and their supposedly disproportionate influence on the continent—in particular, his repeated suggestion that they dress in distinctive 'Arab' clothing in order to stand out more clearly as 'foreigners'—reads as a lot less excusable post-Final Solution. On the other hand, he never believed in racial theory (to him religion, not race, was the primary defining factor), was vigorously denouncing the immorality of eugenics as far back as 1922— well ahead of the curve— with his book Eugenics and Other Evils

among others, and he deeply disliked the race-baiting demagoguery of Adolf Hitler.note Chesterton died shortly after the Nazis took power in Germany. He also had sympathies with the Zionist movement, arguing that the so-called "Jewish problem" would be solved if the Jewish people had their own nation. And he actually believed Jews as a group to be superior to Christians in many regards, recognizing that it was their oppression by the latter that drove them to commercial activities he deemed dishonorable. In short, it's complicated.

Chesterton had a great influence on many writers, especially in the early twentieth century. He was for many years president of The Detection Club, an organization for writers of Mystery Fiction (the oath of which, devised by GKC, demanded that members write only Fair Play Whodunnits); such writers as Agatha Christie, Fr. Ronald Knox, and Dorothy L. Sayers were co-members. Chesterton's fellow Roman Catholics Hilaire Belloc (Chesterton and Belloc were collectively nicknamed the Chesterbelloc by Chesterton's "friendly enemy" George Bernard Shaw) and J. R. R. Tolkien were admirers, and GKC's apologetic writings (especially Orthodoxy and The Everlasting Man) helped inspire C. S. Lewis to convert to Christianity.

Chesterton also wrote an influential biography of Charles Dickens, which is credited with rekindling popular and literary interest in that author at a time when his books had largely fallen out of fashion.

GKC has received many homages and pastiches in fiction. Golden Age mystery author John Dickson Carr was such a strong admirer that he modeled his most famous character, Dr. Gideon Fell, on Chesterton's appearance. More recently, Neil Gaiman modeled a character in The Sandman after him, got his inspiration for London Below from The Napoleon of Notting Hill (as he relates here

), and Gaiman and Terry Pratchett dedicated Good Omens "To G.K. Chesterton: A Man Who Knew What Was Going On." He is also a star in the steampunk Christian series Young Chesterton Chronicles.

Works by G. K. Chesterton with their own trope pages include:

Other works by G. K. Chesterton provide examples of: