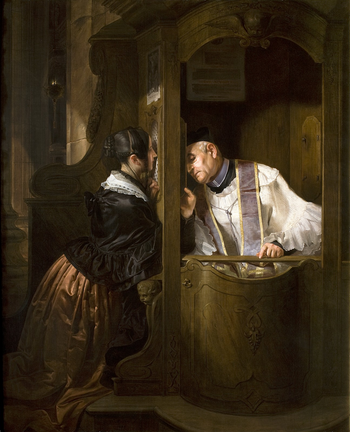 "Bless me, father, for I have sinned."
— Catholic Sacrament of Penance note also present in other branches of Christianity, but see below
Advertisement:

A scene where a character confesses things to a priest, whether or not they're (implicitly or explicitly) Catholic.

This doesn't have to specifically be in a confessional. Deathbed Confessions (of the religious type) should also be included, and any other situation in which a confession of this nature is made to a priest.

As a literary device, there could almost be a subtrope for cases in which the character discovers (usually after making their confession) that the "priest" is not actually a priest. Sometimes they don't discover it. See Bad Habits for impersonation of religious figures generally.

Definitely related to Christianity Is Catholic, since the Catholic Church encourages its adherents to practice Confession and a proscribed Penance once a year at the absolute minimum. Lutherans and some Anglican Churches also have the option of private confessions, too, though it's seldom exercised. And they don't have formal confessionals. Eastern Orthodox have confessions much like Catholics do, but face-to-face with the priest — not in the "confession booth" most westerners are familiar with.

The booth itself is so very useful to the screenwriter for a number of well-worn reasons: