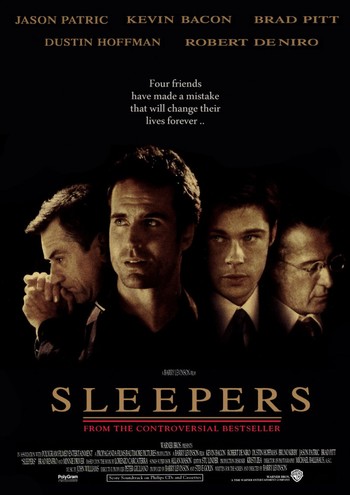 From left to right: Father Bobby, Shakes, Michael, and Snyder/O'Connor.
"This is a true story about friendship that runs deeper than blood. This is my story and that of the only three friends in my life that truly mattered. Two of them were killers who never made it past the age of 30. The other's a non-practicing attorney living with the pain of his past — too afraid to let it go, never confronting its horror. I'm the only one who can speak for them, and the children we were."
— Shakes, opening narration.
Advertisement:

Sleepers is a 1996 crime thriller directed by Barry Levinson and featuring an All-Star Cast. It was adapted from the 1995 novel of the same name by Lorenzo Carcaterra.

It tells the story of four boys who grow up together under tough circumstances in New York City's Hell's Kitchen neighborhood during The '60s. The group is composed of Michael, John, Tommy, and Lorenzo (called "Shakes", short for Shakespeare since he loves to read). Despite the rough conditions of the neighbourhood and their growing ties to mobster King Benny (Vittorio Gassman) the four boys mostly stay out of trouble, partially through the guidance of the local priest, Father Bobby (Robert De Niro). They also have a close bond to Michael's girlfriend, Carol. One day the boys pull a prank that goes horribly wrong, severely injuring an old man and leaving another man deprived of his business, and the four friends are sent to Wilkinson's Home for Boys for a period to a year (Shakes) and eighteen months (the other three). At Wilkinson's the four boys soon become targets for a group of sadistic guards who beat, torture, and sexually molest them in an increasingly brutal fashion.

The story then jumps forward to 1981, with the foursome now in adulthood. Shakes (Jason Patric) and Michael (Brad Pitt) have rebuilt their lives, working as a newspaper clerk and a lawyer respectively. John (Ron Eldard) and Tommy (Billy Crudup), however, were too heavily traumatized by their experiences and chose a life of crime in order to always be able to feel in control. When the two of them come across Nokes (Kevin Bacon), the leader of the guards who abused them, they kill him and are soon arrested for the murder. Michael takes the case against them and begins, with the help of Carol (Minnie Driver), Shakes, King Benny, and alcoholic defense attorney Danny Snyder/O'Connor (Dustin Hoffman), to run a secret play to get John and Tommy free and expose the atrocities that went on at Wilkinson's.

Carcaterra, the author of the original novel, claims the story is factual but that names, places, and dates have been changed. His claims have been heavily challenged.

Michael [to Shakes]: Do you still sleep with the light on?