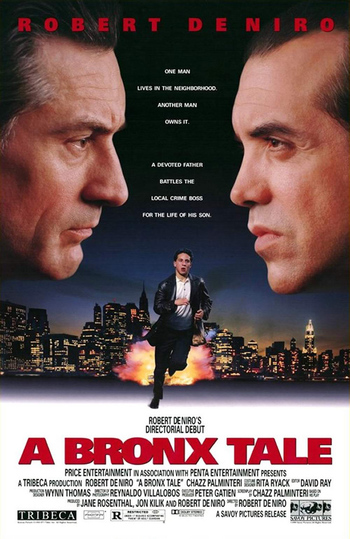 "The saddest thing in the world is wasted talent."
— Lorenzo Anello
Advertisement:

A Bronx Tale is a 1993 film directed by/starring Robert De Niro and written by/starring Chazz Palminteri, based on the latter's own childhood experiences. The film is a touching, heartbreaking Coming of Age Story... with gangsters. Trust us, it's way better than it sounds from that description.

The story begins in the Belmont section of the Bronx in 1960. The main character is Calogero Anello, the nine-year-old son of Lorenzo Anello (De Niro), a poor second generation Italian-American who drives a bus in New York's mass transit system for a living. This lets the Anello family scratch out a living, but although Calogero loves his father and is treated to sermons from his father about both how to live an honest life and how "the saddest thing in life is wasted talent," the man Calogero really admires is Sonny LoSpecchio (Palminteri), the tough and intelligent mobster who runs the neighborhood and is rapidly shooting up the ranks of The Mafia.

Naturally, both of Calogero's parents disapprove of this (especially his painfully honest, straight living father), but nothing they do can stop Calogero's fascination with Sonny, the other neighborhood mobsters, or their hangout bar, which is just a couple of places down the street from his own house. Still, Sonny never notices Calogero or the other neighborhood boys that imitate the gangster... until the day when two men pulling into a parking space at the same time get into a fight, one of them pulls out a bat and attacks the other with it, and Sonny shoots the bat wielding assailant... right in front of young Calogero.

Following the street ethics of his neighborhood, Calogero lies to the police and refuses to identify Sonny as the shooter. A grateful Sonny asks to meet Calogero, and quickly takes a liking to the kid, and soon begins to take him under his wing and treat Calogero like a son, including giving him the nickname C. It isn't long before Sonny and Lorenzo have a tense confrontation about C's time hanging out with Sonny, as Lorenzo fears that it will influence C into embracing the mob lifestyle. Following this a wary truce begins, with both Lorenzo and Sonny influencing and guiding C into adulthood.

Fast forward 8 years. Lorenzo is still driving a bus for the city, Sonny is now a boss, and C is 17 and has spent nearly half his life reaping the benefits of being, for all intents and purposes, like an adopted son to Sonny. In the meantime C's relationship with his father is growing ever more strained, especially as C continues to admire Sonny and soak up input from his friends that have formed their own "social club" and act like a minor league mafia. What's more, C's friends are in the middle of starting a mini race war with the black teenagers from the next neighborhood over. This is something C wants no part of, since 1) both his father and Sonny are fairly tolerant people and have passed that along to him and 2) C is in the middle of falling for a black classmate, Jane Williams.

Soon events are racing to a head. As all these threads come together and the film heads for a climax, Calogero must start making some tough choices about his life, and try to deal with events that will leave most of the characters changed, and more than a few dead...

A gang of bikers decide to stir up trouble at a quiet neighborhood bar... only to find too late that the bar is owned by the Mafia.

A gang of bikers decide to stir up trouble at a quiet neighborhood bar... only to find too late that the bar is owned by the Mafia.